The Low Down on Vitamin D (AKA Vitamin Defend)

Most of us are aware that our bodies can make Vitamin D from sunshine on our skin, but do you prioritise sun exposure within your day to day lifestyle? Well, if you answered anything less than a solid yes, what you are about to read may just sway your decision.

Surprisingly, up to 77% of Australians who work indoors have insufficient vitamin D levels, with approximately 31% of those deficient. These statistics could also be liken to shift workers, students, aged-care residents and those who are at a high risk of melanoma – due to thorough sunscreen application. A major health risks associated with lower than normal vitamin D levels includes poor immunity with an increased susceptibility infections.

A study published by the British Media Journal in 2017 analysed 11 321 people aged 0-95 on the overall effect of Vitamin D on the risk of acute respiratory infections. The study concluded that people with optimal Vitamin D levels for their age group were significantly more protected against the season’s colds and flu’s, and their subsequent reoccurrences. This protection mechanism occurs via the release a strong anti-microbial response to invaders that enter the body. Nature’s own antibiotic. 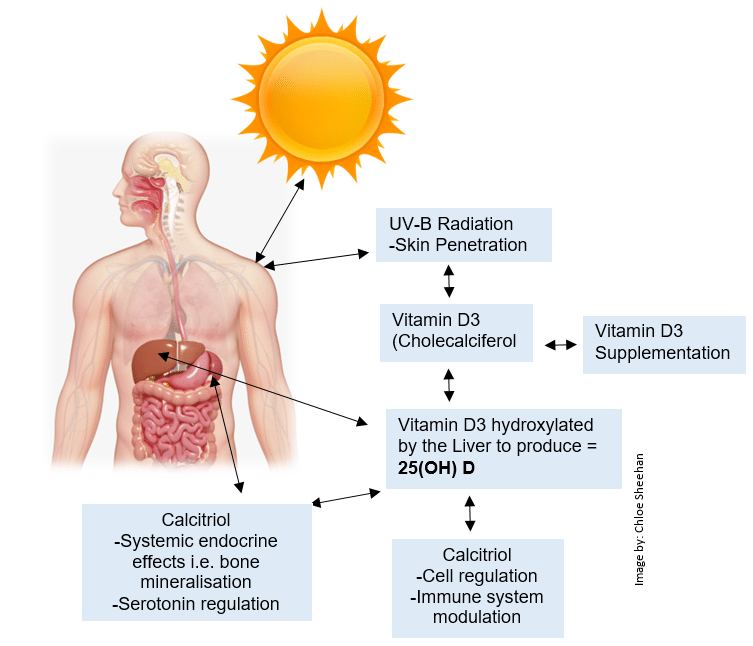 This may be a contributing factor to why we experience more colds and flus in the winter months while hours of sunshine are limited and people are less likely to spent time outdoors.

When the sun’s ray enter the atmosphere at too much of an angle (early morning, evening and some winter months) the UV-B aren’t powerful enough to penetrate the skin and produce adequate Vitamin D3.

This is where the shadow rule (comes in handy. If your shadow is taller than you, it will take longer to produce vitamin D, however the shorter your shadow is, the more vitamin D you will be producing on exposure skin. Although, for fair skinned people, you may only need a maximum of 15 minutes of exposing your bare skin to the sunlight and produce up to 25,000IU of vitamin D. While darker skinned people may need up to 40 minutes in hotter months- Use this link to find out more

Supplementation of Vitamin D3 is secondary to sunshine with the dosages depends on your current levels. 2000IU once or twice a day is a normal maintenance dose. Foods also contain small amounts of Vitamin D: Egg yolks, beef, fatty fish and fortified bread, cereals and milks.

So, in order to protect yourself against colds and flu’s this season, it’s vital to get your dose of sunshine.

Natural Fertility: where to start?