Why You Shouldn’t Ice an Injury!

We have all twisted an ankle, sprained a wrist, or suffered a sporting injury.  When it happens, it hurts!  And we want something done about it.  The accepted treatment of icing your injury that has been in place for well over five decades has come into question.

THERE’S A GOOD CHANCE there’s an ice pack in your freezer; if not, I bet you have a pack of frozen peas.  These are the things you reach for when your sore back, knees, or shoulders flare up. You do this because you’ve been told that icing reduces swelling, speeds up the healing process, and helps you recover from hard workouts that batter your body.  It’s a well known fact right? THIS IS NOT TRUE. 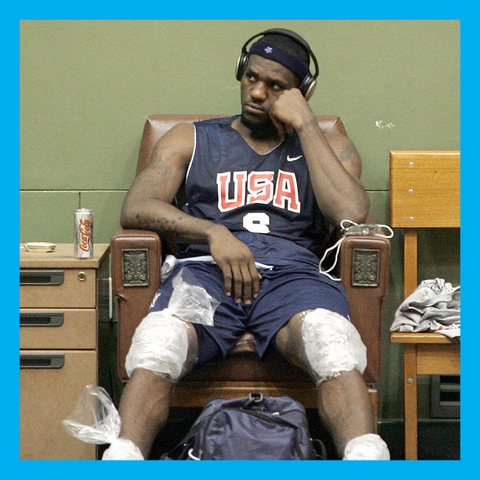 You’ve seen the best athletes in the world doing it, too. There are dozens of photos of LeBron James with his knees wrapped in ice packs and his feet in a bucket of ice — and plenty of photos of NRL stars sitting on sidelines with their quads wrapped in ice. Tiger Woods used to talk often about how regular ice baths helped him make his comeback to the PGA Tour.  This doesn’t make it a good choice for your injury; it just means bad advice has permeated all levels of sports.

There has been no piece of published, peer-reviewed research that has shown definitively that ice is beneficial to the healing process. In fact, recent studies have shown the opposite. Ice can delay healing, increase swelling, and possibly cause additional damage to injured tissues.

That information should stop you cold.

A Brief History of Where We Went Wrong

Acute injury management protocol of RICE has been followed by most doctors, physical therapists and athletic trainers since 1978.  This approach began when Harvard physician Dr. Gabe Mirkin devised the term “the RICE protocol.” The acronym, which stands for “rest, ice, compression and elevation,” is still taught in all levels of medical training from first aid courses up to elite medical schools. 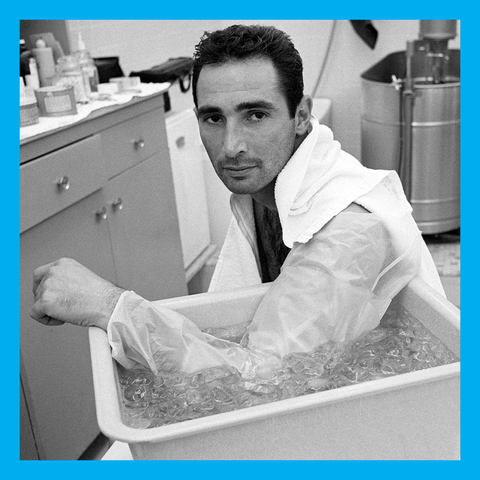 SANDY KOUFAX with his left arm in ice.

“Ice is the best modality to control pain, swelling and inflammation, especially if you ice for 25 to 30 minutes so you get actual cooling of the tissue and decrease inflammation, as opposed to shorter periods where you can get a rebound response,” says Dr Ric Wright, who is currently chair of the Department of Orthopaedic Surgery at Vanderbilt University Medical Centre. “There have not been well-done scientific studies that have crossed my desk that would make me say there was something I would use instead of ice that has been proven to work better. I have no plans to change any time in the near future.”

Yet even “RICE” creator Mirkin now disagrees. He now lectures on how he was wrong about both rest and ice. He wrote the forward to Gary Reinl’s 2013 self-published book, Iced! The Illusionary Treatment Option, which is vitally important to the growing anti-ice movement. “My RICE guidelines have been used for decades, but new research shows rest and ice actually delay healing and recovery,” says Mirkin, now 84. 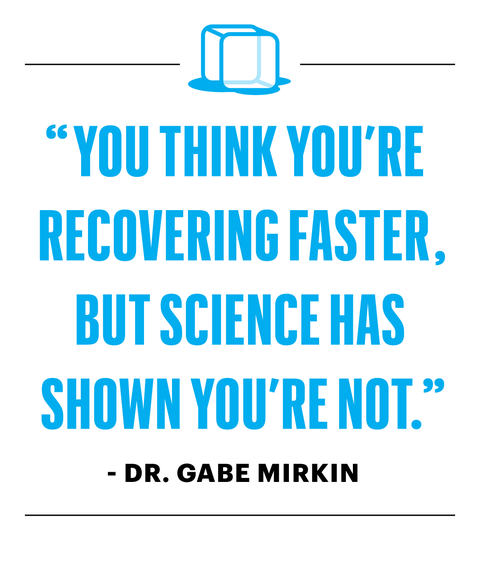 Yes, says Mirkin, if your muscles are sore, you can relieve that pain with ice. But the inflammation causing that soreness is actually bringing healing to the body; by icing, you “dampen that immune response,” he says. “You think you’re recovering faster, but science has shown you’re not.”

Why, then, did Mirkin conceive RICE? Possibly, indirectly, while preparing for surgery on a 12-year-old Boy at  Massachusetts General Hospital, in1962 a Harvard educated surgeon Dr Ronald Malt while deciding how to reattach an arm (the first time such an operation would be successful) put the appendage on ice. 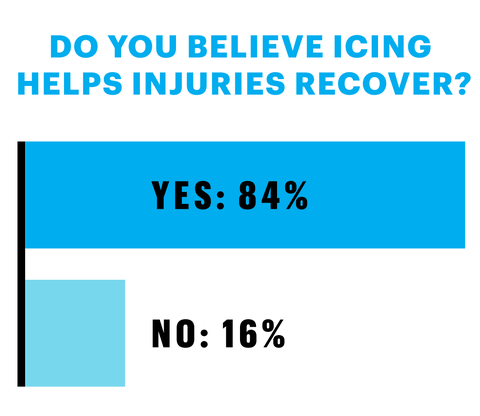 Doctors began using the same protocol to treat all damaged tissue, especially in the sports world. When Mirkin wrote his book, he was simply reporting the anecdotal evidence of doctors who saw a temporary decrease in swelling and pain from immobilization, ice and compression. “In 1978, inflammation wasn’t even in researched literature, but everyone was resting, putting people in casts, wrapping things tightly with ice,” Mirkin says. “I didn’t recommend anything on the basis of extended research. I recommended what everyone was doing at the time.” And because “RIC” just wasn’t that catchy, and a gravitational assist can help blood and fluid be reabsorbed by the body, Mirkin added an “E” at the end for “elevation.” It made for a nice slogan: “RICE is Nice.”

The Case Against The Cold

We all rolled our ankle as a kid playing sports, dancing, running, etc…  I bet you had a bag of ice placed on your ankle.  It probably felt ok, and the fact you were being cared for would have helped the pain a bit as well.  This is an inexpensive approach that will achieve a perceived quick win.

Your coach/trainer/teacher/parent was right about one thing: Ice is the cheapest, most readily available non-habit-forming way to alleviate pain, and no study can dispute this. But the quick win will turn into a loss when the pain returns once the tissue rewarms and the inflammatory response resumes.

That’s because the inflammatory response needs to happen; no matter amount of ice will stop this. The three stages of healing for soft tissue injuries are now universally accepted by the medical community: inflammation, repair, and remodeling. And you can’t reach the repair and remodeling phases until you’ve gone through inflammation. 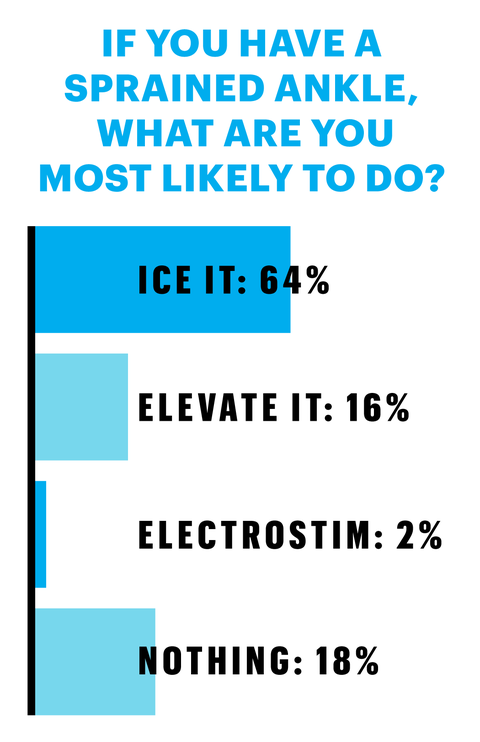 When tissue is damaged, the immune system initiates that inflammatory response, which a 2010 study published in the Federation of American Societies for Experimental Biology Journal showed is necessary to heal damaged tissue and repair muscle. The body deploys its repair and clean-up crew in the form of macrophages, white blood cells that engulf and digest cellular debris. They produce the protein insulin-like growth factor 1 (IGF-1), which is required for muscle repair and regeneration. The same study showed that blocking inflammation delays healing by preventing the release of IGF-1.

Ice delays this process by constricting blood vessels and allowing less fluid to reach the injured area, as demonstrated in a 2013 study in the Journal of Strength and Conditioning Research. This research showed that topical cooling delays recovery from eccentric exercise-induced muscle damage. Additionally, a 2015 article published in Knee Surgery, Sports Traumatology, Arthroscopy showed that the narrowing of blood vessels caused by icing persists after cooling ends and the resulting restriction of blood flow can kill otherwise healthy tissue; that is, icing causes more damage on top of the existing injury.

And as far back as 1986, a study published in the journal Sports Medicine showed that when ice is applied for a prolonged period, lymphatic vessels become more permeable, causing a backflow of fluid into the interstitial space. That means local swelling at an injury site will increase, not decrease, with the use of ice. 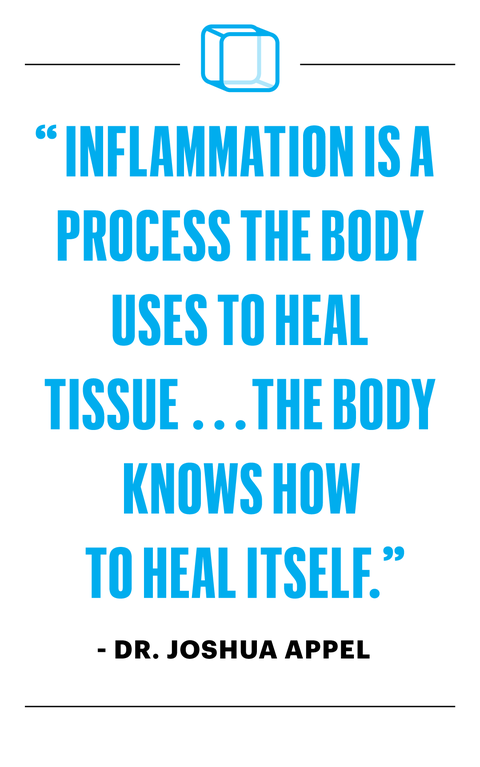 This isn’t just about serious injuries, either; it’s about the way you recover from workouts. Remember: having very sore quads because of a workout is different from torn quadriceps only by degrees. A 2014 study published in the Journal of Strength & Conditioning Research and another done by the University of Queensland showed cold water immersion after training — ice baths — substantially reduces long-term gains in muscle mass and strength by stunting the cell activity crucial for building stronger muscles. When you hit the cold tub after hard exercise, thinking you are reducing inflammation, you’re actually delaying recovery.

Inflammation and swelling have been deemed the enemy, but only swelling is actually bad. “Inflammation is a process the body uses to heal tissue, while swelling is a by-product of that process,” says Dr. Joshua Appel, an Air Force flight surgeon for the 306th Pararescue Squadron and chief of emergency medicine at Southern Arizona VA Healthcare System. “When you recruit inflammatory markers to an acutely injured area, with that comes fluid. The body knows how to heal itself, so you’re not getting too much fluid. But you can have not enough evacuation.”

Losing the Cool: Alternatives To Ice

Pushing a sprained ankle may sound ill-advised, but a 1999 study published in the Journal of the American Academy of Orthopedic Surgeons showed that loading damaged tissue — that is, applying force to it — accelerates healing of bone and muscle tissue, while inactivity promotes aberrant tissue repair.

Moving sore muscles is easy. Corey Kluber, two-time Cy Young-winning ace of the Cleveland Indians staff, hasn’t iced his arm since making the big leagues in 2011. Instead, Kluber does light-resistance exercises that target his rotator cuff muscles after he pitches, naturally activating muscles and moving fluid out of tissues damaged during his starts. “When I was younger, I iced because that’s what people did, that’s what I was told to do,” Kluber says. “But over time, I realized I felt better not icing.” The result: Kluber says he can warm up more quickly the day after pitching.

Acupuncture for Headaches: getting to the point of your pain